After years of begging, the Ford fans received the legend: the Bronco.
An off-road vehicle that was built for severe off-roading, a car that brought back the smile on off-road enthusiasts.

Ford introduced the original Bronco in 1965, and its design was the inspiration for the 2020 model. Some say that the new design team took an old vehicle and scanned it to the smallest details to understand it. Then, they went to the drawing board and made the best retro-look new off-road vehicle on the market.

The Bronco Sport was the smaller brother in the family, but with four doors. The front had a similar design, with a flat grille. A clear lens covered the round headlamps, and an LED daytime running light connected the headlight to the grille. Its lower side confirmed the rugged appearance, with rocker-sliders and a black and curved apron that looked like a shield. The designer team placed a small vent behind the front fenders. The roof had a small step over the rear seats, to make more headroom. It was an idea seen before on the Land Rover Discovery.

The Bronco had an SUV look with two analog dials and a TFT display for the instrument cluster. Ford offered the Bronco with an 8” touch-screen for the SYNC3 infotainment unit. It was compatible with Apple CarPlay and Android Auto. Numerous safety systems were included in the Ford Co-Pilot360 system, such as the Forward Collision Warning, the Lane Keep Assist, Dynamic Brake support, etc.

Unlike its bigger brother, Ford fitted the Bronco Sport with a choice of two EcoBoost engines that offered 181 hp and 245 hp, respectively. Both versions were mated to a standard 8-speed automatic transmission. The all-wheel-drive system was fitted as standard. 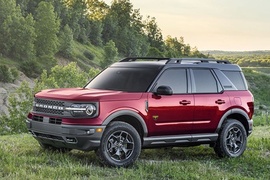