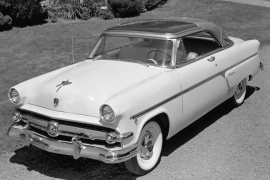 Some people might find it difficult to drive an open-top vehicle, but they still want to see the sky if they look up.
For them, Ford made the Crestline Skyliner in 1952.

Not even a decade has passed after WWII, and the car-industry was blooming. The car market was growing fast in the U.S. and the carmakers tried everything to fill the customer’s needs. Probably if you live in Alaska, you’ll find no reason to buy an open-top vehicle. Even so, it is great to drive when the sun is up and the light goes into your car from the top. But if the outside temperature is under the freezing point, most probably nobody will do that. Ford understood that and made the Ford Crestline Skyliner, and for those who could drive with the top down, the Crestline Sunliner.

Ford built the Crestline with an imposing appearance, big and chromed bumper, and shining bar over the grille. Since it was the new jet-engine era in aviation, the carmaker installed a fighter-jet statue on the hood. The long, rear, quarter panels were sculptured over the wheels and decorated with chromed elements. The Crestline Skyliner was the hard-top version, but it wasn’t just a regular coupe. The carmaker installed a glass-roof over the front passengers, which filtered 60% of the sun’s rays, leaving only the light to get inside. The Sunliner was a conventional convertible with a big canvas-roof.

The interior was luxurious, with two benches for the front and rear passengers. Ford installed a half-circle as an instrument cluster, and on the dashboard, it installed the AC-unit controls. Next to the steering column, the gear-shifter was used for the 3-speed gearbox, either manual or automatic.