After a successful start in 2016, the compact hatchback from Hyundai, the i30, has received a facelift for the 2020 model-year with a new design, signed by Peter Schreyer.
The former designer from Audi-Volkswagen, Peter Schreyer, was in charge of the whole Kia-Hyundai range after it arrived in the Korean group in 2006. His ideas completely changed the way these two brands look and, as a consequence, the sales rocketed. And he tried its hand, again, with the facelift for the i30.

On the front of the 2020 i30 fastback, there was a new bumper with a more aggressive design. A larger grille with a new design for the mesh was introduced. A new pair of headlights with built-in daytime LED running lights. Apart from the N-Line that featured black mesh on the front, the rest featured classic, chromed elements. In the back, the new taillights received new. V-shaped LED graphics to match the front daytime running lights.

Inside, the 2020 i30 fastback received an improved infotainment system with a 10.25” screen, a carry-over from the Kona and Ioniq. For the instrument cluster, a 7” TFT display replaced the analog dials. It offered Apple CarPlay and Android Auto compatibility. 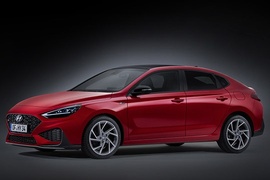