Nissan’s premium brand introduced an updated version for the QX55 SUV in late 2020, for the 2021 model.
When Infiniti unveiled the FX in 2002, there was no other SUV coupe on the market. Its roofline was inspired by the Nissan Z-series (or the Infiniti G35). Later on, BMW introduced the X6, Mercedes-Benz came with the GLC, and Audi presented the Q8. Infiniti wasn’t didn’t rush things and let them evolved slowly, like a slow-cooked food. In 2020 the Japanese brand introduced the QX55 as an SUV-coupe on the compact-segment.

The QX series was developed together with Mercedes-Benz, and it shared the platform with the GLB model. It took a different approach for design and showed a face with a massive grille at the front and a chromed surrounding. Its narrow LED headlights with daytime running lights at the top inspired some sumo-fighter eyes. From its sides, the sloped roofline, and coupe-like windows shape, the QX55 inspired more performance than any other Infiniti SUV to date.

The interior was even more surprising for a high-tech premium vehicle introduced in 2020. It had a regular instrument cluster with analog dials and a TFT display between them for the on-board computer. Two large screens on the center stack were used for the infotainment system and other car settings. In the front, there were two bucket seats and a bench in the back for three adults. Though, the middle one’s legroom was obstructed by the center console with vents.

Under the hood, Infiniti installed its much-acclaimed 2.0-liter turbocharged engine with a variable compression system, which sent the power in all corners via a CVT. 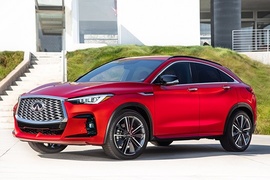