Riding on the success of the first Kia C’eed, the second generation of the compact model was manufactured between 2012 and 2018, with a mid-cycle refresh having been operated on the car in 2015.
The visual differences between the older car and the refreshed second-generation Kia C’eed are subtle, but do make the car appear more modern. Retaining the “tiger nose” engine grille shape and headlamps, the revamped model got a new chrome-look trim around the fog lamps, the grille mesh is now oval-shaped, while the bumper has a more angular design that makes the car appear wider.

The rear end also sports a redesigned bumper, while the taillights were infused with LED technology to make their light signature appear more dynamic at night. The revamped exterior is completed by newly designed 16-inch and 17-inch alloy wheels for the various trim levels.

The subtle design changes continue inside, where the dashboard, center console and the air vents were adorned with a chrome-look trim pieces, while the central panel got a new anti-scratch gloss black finish. Thanks to the addition of more sound-absorbing materials, the NVH (Noise, Vibration, Harshness) levels have been improved, especially on the diesel models.

Speaking of engines, the entire powertrain lineup has been revamped and it now also includes a brand new 1.0-liter ecoTurbo three-cylinder, which is available with either 100 horsepower and 172 Nm of torque or 120 horsepower and the same amount of torque. 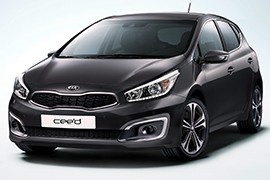