Part of the mid-sized family hatchback market, the first generation of Kia Ceed was released in 2006.
Along the years, the Ceed was produced in over 1.3 million units and was one of Kia’s best selling models, reaching its 3rd generation in 2018.

The Ceed was produced and designed in Europe, the 2018 model bringing a fresh design, with headlamps similar to the sporty Stinger and a refined back, a bit similar to the BMW 1 Series.

The interior of the Ceed was nothing sophisticated, however, it provided comfort and utility. Passengers had more than enough headroom and legroom, with the exception of the middle seat in the back, which was mostly suitable for a short person due to the reduced legroom.

Maybe in 2006 the Ceed was not to be compared with other already famous and desired cars like the VW’s Golf, but Kia evolved surprisingly fast and provided most of the latest features for a lower price than a Golf could.

The Ceed had a 295 liters trunk and a 12v socket inside. It was offered with 5 engine variants, all of them meeting the euro 6 criteria. Even the standard version of the Ceed came with 6 airbags, 4 power windows, power and heated mirrors, an armrest, bluetooth, A/C as well as lane assist, autonomous emergency braking and a fatigue monitor. The safety features mentioned were to become compulsory and nevertheless provided a better crash test score.

The multilink rear suspension was to be appreciated, as it offered more stability and coped very well with the road imperfections.

The Ceed was designed to offer a pleasant daily drive, with upgraded technology and offered the already known 7 year warranty. 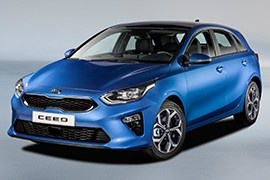