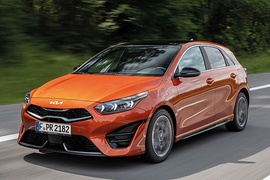 After just three years on the market, the third generation of the Kia Ceed received a refreshed version, with a revised exterior design and improved powertrains.
When the Korean carmaker introduced its new logo and new corporate image, most of its cars were new and still had the older badge. Along with their facelifted versions, though, they received the new, clear logo. Moreover, when it updated the Ceed, the carmaker improved also the safety systems as well. Some of the changes were mandatory, while the carmaker offered others as a bonus package.

From the outside, the 2022 model-year Ceed showed a revised front fascia, sporting the new badge on the hood’s edge. Also, the compact-segment vehicle featured a new grille with a restyled “tiger-nose” signature. In addition, Kia improved the design of the headlights with full-LED units for the GT-line package, which also sported a more aggressive front bumper, 17” light-alloy wheels, and a roof spoiler.

Inside, the carmaker installed bucket seats with a choice of nine upholstery finishes, including black suede leather with contrasting stitching in gray for the GT-Line, and signature red for the GT models. For the instrument panel, Kia installed a large, 12.3-inch display instead of the regular analog dials. It was complemented on the center stack by a 10.25” touch-screen for the infotainment unit.

Under the hood, the carmaker offered a choice of gasoline, diesel, and mild-hybrid drivetrains paired with either a manual gearbox or a seven-speed automatic (dual-clutch). 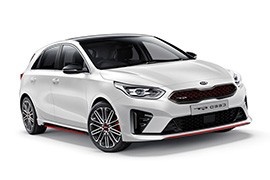 The 2018 Ceed GT is Kia’s shy attempt to enter the market of the hot-hatches.
With its three and five doors versions and a different approach compared to the other versions of the Ceed, the GT version is about to enter in the competition with other mild performance compact cars on the market.

There are some differences compared with more common variants of the Ceed. The front bumper is wider, the grille mesh is a honeycomb and a large air intake. The fog lights consist of four LED lights, brighter and with more stances than of the regular halogen lamps used for the rest of the range.

From the side, the red brake calipers can be seen through the 18” light-alloy wheels. In the back, a roof spoiler, an extended rear bumper with vertical lights are present. The dual chromed exhaust is placed on the outer sides, with a small diffuser between them.

Inside, the Recaro seats with the red GT logo on the seatbacks are present. The bucket seats are providing good lateral support and a lot of adjustments. The instrument cluster consists of a conventional two dials and a central TFT round display that can be customized for the information needed. The infotainment system has a 7” touchscreen display that can be paired with Android Auto and Apple CarPlay.