Named in the honor of Christian von Koenigsegg’s father, Jesko von Koenigsegg, this is the most outrageous supercar made in Sweden.
In 2019, at the Geneva Motor Show, the vehicle vas unveiled by the parents of the supercar founder. Only 125 vehicles will be produced, between 40 to 50 cars per year.

The 5.0-liter engine is the key-element of this supercar. It is an unusual twin-turbo V8 with a 180 degrees crankshaft. Due to this, engineers were able to increase the maximum speed limit to 8.500 rpm. This is one of the highest revving V8 engines in the world. The engine is mostly manufactured by hand within a special steel-shop from Sweden. The result is a remarkable 1280 hp on regular gasoline and 1600 hp on E85. Maximum torque is 1500 Nm (1106 lb-ft), but over 60% of it is available between 2700 to 6170 rpm.

Another special characteristic of the Jesko is the gearbox. It is developed and built in house and features 9 speeds without resorting to a dual-clutch system. Christian von Koenigsegg considered that the double-clutch gearboxes are too heavy. The LST (Light Speed Transmission) is 30% lighter then a regular DCT transmission. 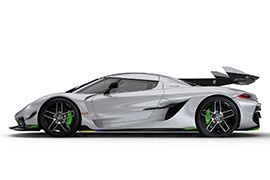