The 2019 Lamborghini Huracan received a facelift, an improvement for the next decade.
The new engine offered is the 5.2 liters naturally-aspirated Lamborghini V10 engine but upgraded for more power and a powerful sound.

Amongst the new technologies that made this engine magnificent, there are titanium intake valves and a lighter exhaust system. The Huracan Evo produces 640 hp and 600 Nm (442 lb.-ft) of torque. For the transmission, Lamborghini has opted for a 7-speed dual-clutch gearbox, which sends the power to all four wheels. Due to this combination of powerplant and gearbox, the Huracan Evo gets a 0-100 kph (0-62 mph) time of 2.9 seconds and a top speed of 325 kph (202 mph).

The Huracán EVO features Lamborghini’s new rear-wheel steering and a torque vectoring system working on all four wheels, while at the heart of the car is a new feature called Lamborghini Dinamica Veicolo Integrata (LDVI): a Central Processing Unit that controls every aspect of the car’s dynamic behavior.

A new 8.4” HMI capacitive touchscreen, located in the center console just above the start button, puts connectivity at the driver’s fingertips, with multi-finger gesture control. Governing car functions including seats, climate and the status of the LDVI system in real-time it also puts all infotainment, such as Apple CarPlay with smartphone integration, at the cabin occupants’ disposal.

A multimedia system incorporates connected navigation and entertainment, including web radio and video player. Android Auto is not available, but Android-based smartphones can connect to the audio system for telephone use. 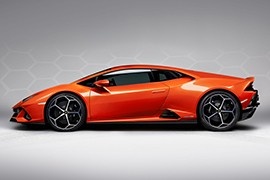