The first Lamborghini hybrid was revealed in September 2019.
The Y-shapes and the aggressive look were matched only by its rumored staggering price of 3.6 million Euro. The supercar is a homage to the former Volkswagen chairman, Ferdinand Piech, with the 37 in the name representing his birth year.

Its design incorporates the theme of Marcello Gandini’s signature wedge shape and hexagonal rear taillights. On the rear fenders, a pair of carbon fiber fins are embossed with the number 63, which is the year when Lamborghini was founded. The power comes from the Aventador’s SVJ engine but upgraded and aided by an electric motor incorporated into the 7-speed semi-automatic gearbox. But the most interesting feature of the new Sian is that it doesn’t store the energy into regular batteries but in ultra-capacitors. These can discharge fast and improve acceleration time in a split of a second.

The combination of the 6.5 liter V12 engine plus the 48-volt electric motor results into a total of 807 hp, which leads to a 0-100 kph (0-62 mph) acceleration time of 2.8 seconds and a top speed of 350 kph (217 mph). The whole car is an homage to the Volkswagen group, which helped Lamborghini rise again from its ashes. Last but not least, FKP are the initials of Ferdinand Karl Piech, the man behind the decision to take over Lamborghini and Ferdinand Porsche’s nephew. 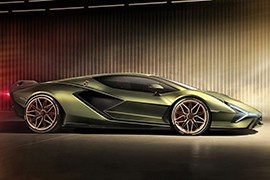