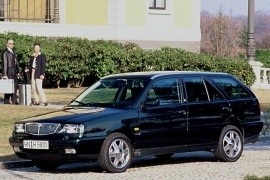 Based on the successful Fiat Type Three platform as the famous Delta Integrale, the Dedra was the compact-segment lineup that helped revive the Italian brand Lancia.
In the early ’80s, the World Rally Championship was dominated by the mighty Audi Quattro S1, and Italians were losing ground with their Lancia 037, RWD, monster. By the mid-’80s, the Group B Rally Cars were banned due to a few deadly accidents. Lancia returned victorious in the Group A category with the Delta Integrale. Using the same platform, the Italians built the Prisma and, in 1992, they came with the Dedra, which they refreshed in 1994.

Due to the softer-looking lines and rounded edges, it wasn’t the same rough-looking vehicle as before, but it looked more appealing for the market. With its narrower grille and reshaped headlights, it didn’t look as aggressive as before, and it found its way into families’ garages across Europe. With the station-wagon version’s introduction, the Dedra became a very popular premium family vehicle since it had the brand, the features, and the right price. The rhomboidal third window behind the C-pillars and the raked tailgate made it look like a sporty wagon, and with the proper engines installed, it really was a quick vehicle.

Inside, the Dedra Wagon was fit for up to five passengers, but the high center tunnel was too intrusive into the cabin. That made a difficult position for the middle rear passenger. The softened edges of the dashboard and the six-dials instrument cluster, apart from the analog clock, were unusual when most car-makers tried to offer just four gauges. While the base trim levels featured cloth seats and a basic interior, the upper levels received wood-trim on the seats’ dash and leather upholstery.