The third generation of the Land Rover Discovery was unveiled at the 2016 Paris Motor Show and it was based on the same platform as the Range Rover Sport and Range Rover Sport.
Unlike its smaller brother, the Discovery Sport, the Discovery was engineered to tackle hard off-road. Moreover, it was fitted with bigger engines and up to seven seats even in the all-wheel-drive version. In fact, it wasn’t offered as a two-wheel-drive at all.

The SVX version was a 2018 addition to the existing range. It was offered as a highly capable off-road vehicle. It was the Rubicon of the Land Rover. But it was built like a rally raid vehicle, with some stylish front bumper and apron, but kept its bodywork protected from the rocks thanks to high ground clearance and the standard pneumatic suspension. On top of the car, a light-pod with LED-lights was installed. In the back, a wide gap in the bumper revealed the hook for the factory-installed electric winch.

Inside, there was the usual luxury of a Land Rover, with a big, 10” touch-screen in the dashboard. The car featured more off-road options such as the low-range gear, or the locking differentials. It was available with a five or seven-seat configuration.

The powertrain featured a supercharged 5.0-liter V8 engine, tuned for more torque on low RPMs. The 8-speed automatic transmission was fitted as standard. 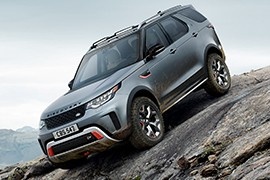