Land Rover introduced a plug-in hybrid version for its flagship model, the Range Rover, and drastically improved the vehicle’s fuel efficiency.
The race for a cleaner vehicle was on, and most carmakers started offering hybrids and plug-in hybrids on the market, but only a few offered such an option for an SUV. Apart from Volvo, BMW, and Audi, no other carmaker provided a plug-in hybrid. Yet, Jaguar-Land Rover burned the midnight oil and came up with a solution for the big off-road British barge.

At the front, there was a similar front fascia as on the regular, gasoline-only powered Range Rovers. Although, the grille was different and featured an access port for the plug. Its new, pixel-LED headlights incorporated 142 light-emitting diodes.

Inside, the carmaker designed the interior with its top luxury features. The sunblinds were opened and closed by gestures in front of the rearview mirror, not by pulling a strap or pushing a button. The carmaker installed two 10” touch screens on the center stack for the infotainment system and climate control unit, while another screen replaced the analog instrument panel. For a truly mobile office, Land Rover fitted the Range Rover PHEV with 17 connection ports inside the cabin, including a home outlet for a printer, if needed.

But the most crucial part of the car was under the hood. A turbocharged inline-four gasoline engine served as part of the 404 hp powerplant. Land Rover paired it with a ZF gearbox that integrated an 85 kW motor. Power went in all corners, and since it was a Land Rover, it featured a low-range transmission gear. Thus, it could crawl through rough off-road areas where most other SUVs could only dream about. 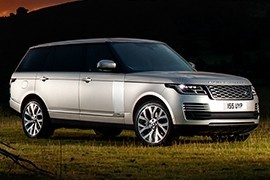