Ford’s premium brand Lincoln introduced a new facelift for the second generation of the Nautilus in late 2020 as a 2021 model year, and the changes were not just cosmetic.
After switching from a three-letters name to a full name, Lincoln took a different approach to design and technological improvements in its lineup. The Nautilus was the successor of the MKX, which was introduced in 2016. In 2018 it changed its name and its look. Just two years later, the mid-sized SUV was refreshed once again.

Some might say that the new grille design resembled the one existing on the Bentley Bentayga, with the mesh-look and the vertical cross-hair badge in the middle. The headlights, though, were a different story, with their elongated shape.

Inside, Lincoln installed a new, 13.2” screen on top of the center stack. It was fitted with the SYNC4 system and a phone as a key technology. Some considered it too tall, but it surely was visible for everyone in the car, and maybe for those behind it. Due to the horizontal lines and dashboard design, it looked wider inside than it was. The roomy cabin was fit for up to five, with three headrests in the back.

Under the hood, the Nautilus featured a choice of two turbocharged engines: a four-pot and a V6 mill. Unlike its predecessor, all versions were paired to an 8-speed automatic gearbox, instead of six as it were on the 2018 model. 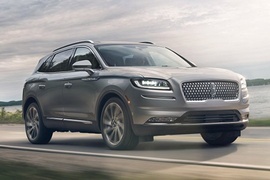