The new car-company from the Silicone-Valley launched a stunning car from many points of view: from the incredibly low drag-coefficient to the high performance, electric, drive system.
After Tesla started to promote and sell its electric vehicles, more and more carmakers started to think if it is possible to build something the same, or better. Lucid air was one of them and its 2020 product brought new improvements and new technologies to make an electric car looks like it came from the future of the automobile.

The slim front part of the car was carefully designed with a signature light band on the hood and the smallest headlights in the industry. They are less than an inch (25.4 mm) tall. The technology was developed in-house by Lucid engineers. The sleek profile of the car and led to a drag-coefficient of just CX 0.21, which was the lowest in the world. The trunk was a big clamshell in the rear and it allowed the introduction of wide items. The rear light ran uninterrupted across the trunk lid.

Due to its long wheelbase and low profile, the car offered a spacious interior. The batteries were mounted in the center tunnel, rocker panels, and the floor. For the dashboard, a 34” curved-glass display showed the information in a 5k resolution. An additional display was retractable from the center stack, for both front passengers.

The Lucid air technology for the batteries was tested in over ten years and over 20 million miles of real-world testing. The Air was offered in three versions: the Air, the Touring, and the Grand Touring. The top of the line version featured a 1080 hp electric motor which ran a quarter-mile (402 m) in 9.9 seconds. 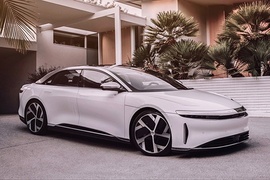