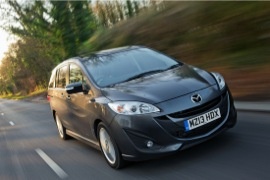 Mazda unveiled the third generation of the Premacy/5 lineup at the 2010 Geneva Motor Show, and it was designed as an ultimate family MPV.
While the customers were already looking for crossover-SUV vehicles, a few carmakers tried to keep the MPV spirit alive. Mazda was one of them, and it built the third generation of the 5/Premacy on the same platform as the compact 3 model.

From the design point of view, there was already a clear departure from Ford’s management. Mazda’s front fascia was changed into a smiling face with a grille that looked like an open laughing mouth. The headlights resembled those installed on the Mazda 3 series. On the sides, a wave-like sculptured door panels and made a clear impression of movement. Despite the big rear area, the tailgate didn’t look like it was stolen from a shed and bolted on the car. Its sweeping, V-shaped lower line and the big taillights formed a well-balanced proportion between metal and glass areas.

But the essential part of the car was the interior, where the carmaker installed seven seats on three rows. The last row was in the trunk and, as expected, could fold flat into the trunk area. The second row was tilting and sliding to allow easier access in the back. Also, the middle seat could have been folded and used as an armrest or a storage compartment. At the front, Mazda tried to offer a good driving position for the Premacy, regardless of the driver’s height.

The Japanese carmaker installed a wide engine choice under the 5/Premacy’s hood. Depending on the market, Mazda offered gasoline or turbo-diesel versions, paired to manual or automatic transmissions. 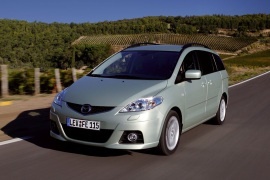 The Mazda 5 released in 2008 was nothing spectacular, but definitely served its purpose.
Most of the users who got the chance to drive it say that it was one of the most fun-to-drive minivan!

As you would expect, a minivan was not designed to be fast. However, the Mazda 5 was not slow either. The agile car driven by the 2.3-liter DURATEC engine – a Ford engine – developed 153 hp with 148 tq. The engine was mated with either an automatic transmission or with a manual one. The Mazda 5 used a front-wheel-drive system.

The car had a very good handling, did not understeer much and did well on turns, unexpectedly well for a minivan.

The interior was a simple and clean one, with intuitive well lit up gauges, controls placed on the steering wheel, AUX function and storage places.

The Mazda 5 was equipped with power locks and power windows, am/fm satellite, CD and media – with the multifunction audio system.

The plastics used for the interior were hard and easily scratchable.

The passengers in the 3rd row were not a fit for adults, so the car was a great match for families with children. 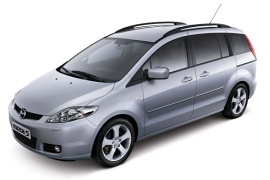 In 2005, Mazda was still connected to Ford Motor Company, and it developed a minivan based on a jointly developed platform.
While it shared some parts with the Ford Focus or the Mazda 3, the 5/Premacy aimed at a different market segment, it was a compact MPV that tried to offer a car-like behavior and still carry up to seven passengers inside.

At the front, the 5 resembled the same grille design as its compact sibling 3. The egg-shaped minivan featured a raked front area with a tall windshield. On its sides, the rear sliding doors were unusual for its class. For instance, the Ford C-Max, which was built on the same platform, featured hinged doors. In the back, the 5 featured an almost vertical tailgate, with a slightly raked rear window.

Inside, Mazda engineers succeeded in installing three rows of seats in a 2-3-2 configuration. Due to the long roof, there was no problem with the headroom for the last row of seats for the average-sized passengers. The instrument cluster featured a similar design with the Mazda 3 and a high center stack with the gear-stick or gear selector, depending on the transmission option. A sat-nav system was offered as an option, while the standard trim-level offered a CD-stereo.

Under the hood, Mazda installed a choice of gasoline and diesel engines. Depending on the market, the 5 was offered with an automatic transmission.