The McLaren F1 LM was built to celebrate the Le Mans victory in 1995.
It was the fastest road car ever built and also the most expensive one, being limited to 5 units only.

The LM’s exterior design was almost identical to the GTR’S that won the race. It had the same rear wing, roof scoop, rear diffuser, and other elements, however, the front bumper was different and was painted in the same color as the body, as opposed to the GTR’s black color.

The cockpit of the LM was the improved version of the GTR’s, offering more comfort. The LM kept the center-mounted driver’s seat, however, they added 2 passenger seats to make the sports car more suitable for daily drivers with friends.

The engine was the one that was used on the GTR but without restrictions. It delivered with 80hp more power, the 6.1-liter V12 offering a total of 680 hp.

The car reached 60 mph in an estimated 3 seconds, a bit quicker than the F1, having a top speed of 225 mph. It was equipped with 18-inch alloys, with Michelin tires developed for a better grip.

The LM’s price was never made official, however, it was more expensive than the F1 which was rated at $1 million. Out of the 5 units ever built, 3 were shipped to the Sultan of Brunei. 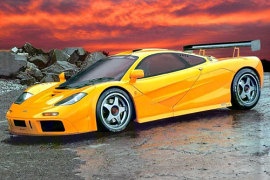