Some will see the McLaren Speedtail as a direct successor to the legendary F1, especially since both models feature a set of identical characteristics.
The Speedtail has the driver sitting in the middle, flanked by two passenger seats like in the McLaren F1. At launch, the Speedtail will be the fastest McLaren in the lineup, just like the F1. Last, but certainly not least, McLaren will only make 106 units of the Speedtail, which is precisely the same number of F1 models that were ever built for the road.

This is were the similarities end, though, because the Speedtail is overall a different kind of monster, more modern from just about every point of view compared to its predecessor. Instead of a naturally aspirated V12 with BMW there is a hybrid powertrain with 1050 horsepower behind the three-seats and the top speed is a tad higher at 403 kph (250 mph). Since it was built mainly for straight-line speed, the body is also a tad narrower but also much longer than that of the F1, or any other McLaren road car for that matter. Another record broken by the new Speedtail is also the 0-300 kph (186 mph) time, which sits at just 12.8 seconds, 3.7 seconds less than the mighty P1, which also featured close to 1000 horsepower of hybrid output. 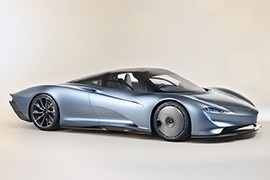