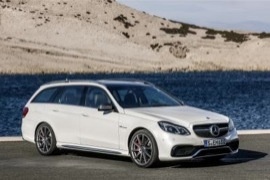 The 2013 E63 T-Model was just the kind of car for someone who was looking for a sports car but didn’t want to stand out with an opulent CLS.
And the station-wagon was a family car after all.

Or, it might as well just be the perfect car for very very fast delivery service. No matter the reason, the car was built and it was more powerful than other famed sports cars or GT vehicles. It was the car that could put 557 hp on all four wheels.

There were some clues to reveal the beast hidden under the family premium station-wagon. First, it was the grille with the characteristics horizontal chromed double-bar that emerged from the side to the center Mercedes-Benz badge. Then, there were the large air-scoop on the lower part of the bumper and big side-scoops meant for cooling the brakes.

Inside, the car was just a luxurious family station-wagon with bucket-seats upfront and a wide bench-seat in the rear. Of course, the technology available for the driver was up to date, with a premium infotainment system and all the comfort features for the era, including leather upholstery, heated and ventilated seats plus a specific design for the gear lever.

But the real magic was under the bodywork. Apart from the specification sheet, there were some more details involved in the AMG E63 E-Class T-Model. The AMG Carbo-ceramic larger brakes, the adaptive air suspension, and the special AMG SPEEDSHIFT MCT 7-speed sports transmission. The fast family station-wagon could do a 0-100 kph (0-62 mph) sprint in 3.8 seconds. If that wasn’t enough, the AMG also offered an “S” version with almost 600 hp. 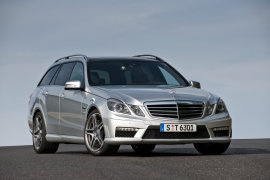 Mercedes-Benz unveiled the E 63 AMG at the 2009 New York International Auto Show and showed a slight increase in power and a unique design.
When the German carmaker announced the introduction of the E-Class, its fans were waiting for the AMG version, and that came in both shapes as a sedan and station wagon. The latter was used as a medical emergency vehicle in the Formula 1 World Championship. Its performances were strong enough to go around a track with mind-blowing speeds, and it was not scared by corners or bends.

At the front, the E 63 AMG T-Modell was 17 mm (0.7”) wider than its non-AMG stablemates. That called for slight redesigned front fenders to accommodate the 255/40 R18 wide wheels. Its front bumper received a specific design with an A-shaped lower grille flanked on its sides by scoops that hosted the LED-daytime running lights. Mercedes’ in-house tuner placed the 6.3 liters chromed badge on the front fenders, while in the back, the carmaker installed a set of 285/35 R 18 tires.

Inside, the carmaker introduced carbon-fiber trims instead of wood-veneers or aluminum decorations. The metallic pedals looked sporty and grippy. Above the dashboard, covered by the same cluster as the instrument panel, Mercedes-Benz installed a new infotainment unit. Since it was a high-performance vehicle, regardless of the body version, the E-63 AMG T-Modell received high-bolstered seats for the front occupants.

With a 6.2-liter engine and a seven-speed automatic, the E-63 AMG T-Model offered performances that matched some supercar performances in terms of straight-line acceleration, with all-family inside. 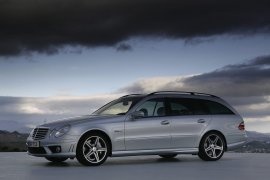 Somewhere along the road, the horsepower battle moved from compact-sized cars to bigger ones and even to the station-wagon category.
One good example of a very fast station-wagon was the 2006 Mercedes-Benz E63 AMG T-Model.

In 2006, Mercedes-Benz unveiled the facelift for the E-Class at the New York International Auto Show. The E63 AMG was the most powerful E-Class ever made. It produced 38 more hp than the E55 AMG, which had a 5.4-liter supercharged engine. Even if it offered less torque, it was faster to 100 kph (62 mph). On a drag-strip, it was faster than an Audi R8 supercar.

The family station wagon tuned by the AMG featured a more aggressive front styling. A different bumper and apron, with bigger air-intakes and different side sills. The grille was the same so, at a glance, it wouldn’t be that noticed. A bigger set of wheels with a special five-spoke design was included in the package and so were the four exhaust pipes in the back.

Inside, the E63 AMG Station-wagon featured the same interior as the non-AMG versions, but with some small differences such as the aluminum pedals.

The engine was a naturally aspirated V8 with a 6.2-liter displacement. The 63 number didn’t come from the displacement. It came from the torque, expressed in Newton-meters: 631 (465 lb-ft). It was mated as standard to a 7G-Tronic gearbox. 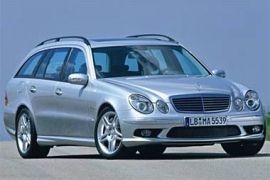 In January 2003, the new generation of the E-Class T-Model (S211) was unveiled at the North American International Motor Show in Detroit.
It was the station-wagon version of the 2002 E-Class sedan (W211).

After the successful AMG versions on some specific vehicles, the German car-maker understood that the market wants those performances even on station-wagon shapes. Thus, it offered on the market the E55 AMG T-Model. A car that looked like a family-hauler but ran like a sports car. Or even faster.

From the outside, the E55 AMG featured an AMG body-kit with subtle cues that could differentiate it from the E500. A black mesh-grille, 18” light-alloy wheels, silver-painted calipers, and the “E55 AMG” and “V8 Kompressor” badges on the fenders. A small roof-spoiler was placed on top of the rear window.

Inside, there was room for five adults, but with the front seats featured a higher bolstering. As an option, there was a third-row seating, facing the back of the car, placed in the trunk area. So, it was a 7-seat fast wagon. The leather upholstery and the premium sound system were fitted as standard.

The 2004 E55 AMG T-Model featured the same, 5.4-liter, supercharged engine. It was mated to a standard 5-speed automatic and it was able to put shame on a Porsche Carrera on a 0 to 60 run or beat a Ferrari to the quarter-mile. Unlike its sedan sibling, the E55 T-Model featured a better weight distribution of 51/49 weight ratio.