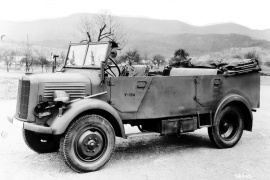 Mercedes-Benz adapted its L1500 truck for army use and built it with an all-wheel-drive system.
Mercedes-Benz developed the L1500 as a light utility vehicle, and it was mainly used as a fire-truck with rear-wheel-drive. But the German army needed an off-road vehicle able to carry troops and supplies to the battlefield. The engineers offered a quick solution for that by adding a new front axle and a driveshaft, transforming the civilian truck into an off-road vehicle.

The carmaker created a specific look for the front area that made it different from other army trucks. Its engine compartment was rounded at the top and with long horizontal vents on the sides. The radiator was adorned by the three-star badge painted in the same color as the rest of the car. It couldn’t make it chromed. Depending on the troop’s needs, the bodywork featured side doors and no roof or completely covered cabins for eight occupants, including the driver. Compared with the standard L1500, the A had the radiator pushed above the front bumper, which was welded on the chassis endings.

Mercedes installed two seats at the front for the driver and its co-driver (mechanic – shooter) and two face-to-face benches in the back. The carmaker installed a set of dials for the speedometer, coolant temperature, fuel level, and even a small tachometer for the instrument panel. Behind the passenger area, the carmaker installed a storage compartment. Since Mercedes-Benz had an impressive experience in building open-top vehicles, it made a retractable roof that was folded behind the rear bench.

The carmaker installed a 2.6-liter inline-six gasoline engine in the engine compartment, which provided just 60 hp and was paired to a four-speed manual gearbox. 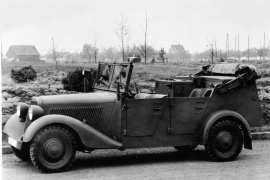 The 170 VK was one version for the 170 V, a car that was offered in many bodywork versions, from an off-road roadster to a delivery van.
And it was designed to be used as a military vehicle.

In February 1936, the International Motor and Motorcycle Show in Berlin was dominated by the theme 50 Years of Automotive Engineering”. As was to be expected, Daimler-Benz was present at the historic anniversary show with a host of exhibits in the hall of fame. Not only that, with the 170 V, 170 H, and 260 D, it also unveiled three new passenger car models. The “V” in the model designation indicated that the engine was at the front. Based on the new V-series, the German car-maker built other types of vehicles, with a military destination, and the VK was one of the most successful.

The backbone of the vehicle was the X-shaped oval tubular frame design, which was similar to the H-versions (air-cooled rear-engines) and the Kaffer (Beetle). It was tough enough to cope as a Kubbelwagen (vehicles for rough terrain).

The VK version featured flat surfaces and diagonally cut doors. It was a vehicle where the design followed functions. It was fit with mounting points for machine-guns, short overhangs, and off-road tires. Its higher ground clearance made it ideal for military purposes. One of its main advantages was the suspension system, with transverse springs for the front wheels and a swing axle in the rear. The worm and lever steering mechanism made it very reliable under stressful conditions. It was built to carry four, fully equipped soldiers. The long final drive ratio of 4:125 made it good in climbing and difficult terrain but limited its top speed. The VK was produced in 19075 units. 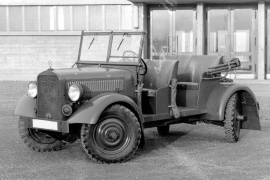 The 170 VL was one version for the 170 V, a car that was offered in many bodywork versions, from an off-road roadster to a delivery van.
And its purpose was obviously to be used as a military vehicle.

In February 1936, the International Motor and Motorcycle Show in Berlin was dominated by the theme 50 Years of Automotive Engineering”. As was to be expected, Daimler-Benz was present at the historic anniversary show with a host of exhibits in the hall of fame. Not only that, with the 170 V, 170 H, and 260 D, it also unveiled three new passenger car models. The “V” in the model designation indicated that the engine was at the front. As far as Daimler-Benz was concerned, the 170 V was by far its most important pre-war passenger car model, securing the Mercedes-Benz brand a top position in the mid-size segment.

The backbone of the vehicle was the X-shaped oval tubular frame design, which was similar to the H-versions (air-cooled rear-engines) and the Kaffer (Beetle). It was tough enough to cope as a Kubbelwagen (vehicles for rough terrain).

The VL version was built with four removable doors and an open top. The idea was to build a very light vehicle. After the successful versions built for the German Army and Police, the VL was intended as an expedition vehicle. Its high maneuverability came from the rear axle, which was steered. 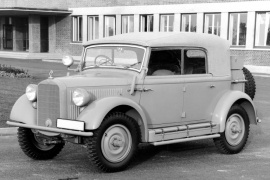 The G5’s predecessor, the Mercedes 170VL (W139) was an unsuccessful model, thus Mercedes decided to develop the G5.
The G5, also named the W152, was an off-road vehicle built for military and civilian purposes. It was built by Daimler-Benz and started production in 1937.
The upgrade included an increased wheelbase as well as a slightly modified grille design. The car received a 2006 cmc engine developing 45 hp and the car reached a maximum speed of 85 km/h in normal operation. When the all-wheel-steering was used, the maximum speed was at 30 km/h.
The power was transmitted to all four wheels through a 5-speed manual transmission. The car had hydraulic brakes on all four wheels.
The G5 was by 600 kg heavier than its predecessor and only allowed a payload of 270 kg instead of 500 kg allowed with the older models.
Unfortunately, the G5 was not as successful as expected and did not raise military interest, therefore Mercedes decided to present the car to the public in 1938.
The cars could accommodate up to 4-5 passengers and were built with various body styles depending on the buyer’s specifications. Enjoying a popularity comparable to that of the G-Klasse, special G5 models were available under different names such as the typ Bergwacht (for mountain rescuers), Kolonial (colonial car) and Jagdwagen (hunting vehicle). Military versions were produced as well with a reinforced body with removable steel doors. 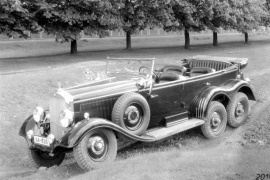 The Mercedes-Benz G4 was a rare vehicle, built only for top-Nazi party members.
It was developed for the German Army, but it was too expensive to be sent on the battlefield.

In the mid-’30s, the Mercedes-Benz started to build vehicles for off-road use. Its evolution started after the 1926 G1 model was developed for off-road and military use. While the G1 featured twin wheels for the rear axles. The G4 received simple wheels. The twin set was not needed for a passenger vehicle.

The rugged appearance of the G4, with its imposing stature. In a closed version, it was 1.9m (6.2 ft) high and it was almost 6 meters (19.4 ft long). The high and long engine compartment was complemented on the sides by curved fenders and a spare-wheel on each side. In the rear, the double axle system was covered by a special, elongated, fender.

The big G4 featured a spacious interior fit for up to seven passengers. It was the vehicle of choice used by the German dictator Adolf Hitler when he went to parades. The models used by him featured a front passenger seat that could be folded up, making it possible for the dictator to stand upright and wave to the crowds.

The G4 started with the G1engine. It was an inline-8 unit that offered not more than 100 hp. In 1937, a bigger 5.2-liter unit was installed and the power increased to 115 hp. Due to the shortage of high-quality fuel, the engine was modified again in 1938 up to 5.4-liter, but the power dropped to 110 hp. Regardless of the engine version, it was mated to a 4-speed manual transmission. The rear axles featured self-locking differentials. 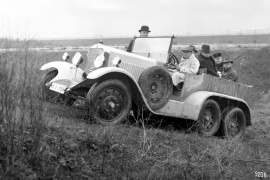 After WWI, Germany was denied to develop military vehicles, but some researches could still be made, and such was the situation with the Mercedes-Benz G1.
At the beginning of the ’20s, there was a high demand for trucks of all sizes. Mercedes-Benz started researching for a new vehicle, able to cope with off-road and uneven terrain. It was the first step toward a vehicle that was suitable for the trucking companies and the army as well.

There were allegedly seven Mercedes-Benz G1 vehicle built by the German carmaker. It was more of a study to find out if that kind of vehicle would be suitable for off-road use. In the ’20s, the Autobahn network didn’t exist yet and most of Germany’s roads were unpaved. The vehicle featured a high ground clearance, two axles in the rear equipped with twin wheels. It was a very good base for a truck.

The prototypes were designed to carry up to six passengers, although the twin rear-wheels might suggest the ability to carry heavier bodyworks (i.e. armored). It was used in some military exercises. Soon after, the concept vehicles were taken back and the carmaker started a new development, for a better vehicle, the G4. The G1 never went into production.

It featured a simple layout with an inline-six engine that offered just 50 hp. Its on-road performance was limited due to the tires performance.