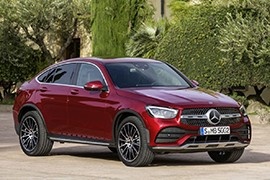 Mercedes-Benz board of directors decided that they wants a big piece of the SUV-Coupé market and launched the GLC Coupé.
Now they came with a facelift which will add more performance, more economy and technology to the smallest SUV-Coupe from the three-pointed star brand.

They came with both gasoline and diesel and in four cylinders architecture with Euro6d. In order to achieve this, they will use both catalytic converters and a SCR system with AdBlue for the diesels and gas particulate filters for the gasoline powertrains. Gas engines will have a 48 volts architecture and the alternator also plays the starter role. The system acts like micro-hybrid technology, diminishing the fuel consumption and also adding more comfort to the driving experience.

The drivetrain will host a choice of suspensions both mechanical or pneumatically controlled. Transmission choices are either a 6-speed manual or a 9-speed automatic transmission.

On the outside, the fastback-like look will be enhanced by the LED lights standard on the rear and as an option on different versions for the newly designed headlights.

Inside, you can find room up to five people, but the cramped rear seats are made more like for four people. Being a Mercedes-Benz means that the technology must be present in every detail. The refreshed GLC Coupé will offer a combination of touchscreen display, navigation and augmented reality to help users to have a better experience. 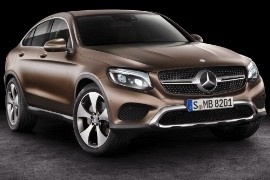 When Mercedes-Benz introduced the GLC Coupe in 2016, and entered the market of the premium SUV-coupe segment, directly competing against the BMW X4.
When more and more carmakers started to build SUVs, it became even more challenging for customers to choose the right car. Yet, Mercedes-Benz considered that the premium customers didn’t get what they wanted and offered the GLC Coupe based on the same platform as the C-Class. Unsurprisingly, it was more of a mall-roader than an off-roader.

Its sportier look was dominated by the grille at the front, with one horizontal slat for the base trim levels or a 3D pattern, diamond-look design for the AMG package. The bumper sported a trapezoidal grille in the middle flanked by a pair of scoops on the sides. From its profile, the sloped-down roof caught the eye. It mimicked the shape of a four-door coupe. Its tailgate featured a small duck-tail behind the rear window.

Inside, the front part of the cabin was identical to the regular five-door GLC. In the back, it was a different story. The sloped roofline affected the headroom, so the six-footers (over 1.80 m high) passengers were not that happy. Mercedes-Benz installed the third window behind the rear bench, but that didn’t enhance the interior light.

Under the hood, the carmaker installed a choice of six engines, either gasoline-powered, turbo-diesel, or hybrid. Apart from the latter, the other versions sent their torque in all corners via a nine-speed automatic transmission.