It was the longest and the most potent S-Class ever, and it offered a straight-line acceleration that could match a supercar.
The 2017 Mercedes-Benz S-Class L was a piece of engineering and architecture alike. It was that kind of limousine that looked great in any luxurious resort, in front of the Opera or the parking lot of a multi-million dollar estate. The AMG S 65L, on the other hand, was made for those who asked for more.

Usually, a luxury car didn’t have such an aggressive styling at the front. But the S65 L was not an ordinary vehicle. It revealed its muscles through the silver mesh design that covered the grilles from the apron. From its sides, the S65 featured unique, 16 spokes 20” light-alloy wheels. The longer rear doors allowed an easier ingress and egress to the car for the rear passengers. Maybe they had to crawl out from the fast Merc’.

Inside the cabin, at the front, the luxurious vehicle featured the same dashboard as the rest of the range but with AMG-specific vents and ash wood trims. The customers could have chosen a carbon-fiber decoration if they liked to, but that didn’t fit the context. There were only two seats separated by a center console in the rear, which emerged from the one placed between the front seats.

Under the hood, the massive, twin-turbocharged V-12 powerplant had to be tuned down to 1000 Nm (737 lb-ft) of torque not to ruin the transmission. AMG didn’t install the newest 9G-Tronic gearbox for the S65 since it couldn’t cope with that much pressure and chose the 7G-Tronic instead. Power went only to the rear wheels, so the car could even drift. AMG programmed the ESP so the driver could do that if the owner from the rear seats wished that. 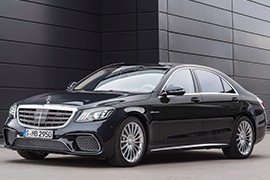