Nissan unveiled the sixth generation of the Altima at the 2018 New York International Auto Show, and it came with significant improvements over its predecessor.
Since the first generation appeared in 1993, the Altima was a formidable contender in the mid-size segment, especially since the carmaker made it technologically advanced. For instance, the first Altima featured a head-up display, which was unheard of for most cars. The second generation, launched in 1998, featured a keyless entry system. The innovations continued on the following generations, and Nissan sold 5.6 million Altimas in 25 years.

For the 2018 model, the carmaker introduced the new design language from the Vmotion 2.0 Concept car. Its chromed, broad, chromed V-shaped trim on the grille and the swept-back angular headlights were more on the sporty side of the segment than on the same page with its main competitors, Honda Accord and Toyota Camry. Its muscular profile with a raised beltline in front of the sloped C-pillar, and black trim, induced the idea of a floating roof, while the short decklid that sported a lip spoiler confirmed the sporty car’s character.

Inside, the Altima featured a broad dashboard with a silver, V-shaped trim that ran across the front side of the panel. The carmaker installed a touch-screen display for the infotainment unit placed above the center stack. It supported the Android Auto and Apple CarPlay connectivity, while the center console with a minimalist design. A piano-black trim adorned it.

Another significant change was under the skin, where Nissan introduced an all-wheel-drive version for the first time on an Altima. The carmaker offered the mid-size sedan with a choice of two engines: a 2.5-liter naturally aspirated and 2.0-liter turbocharged unit. 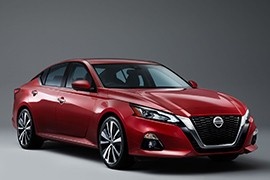