Nissan introduced the 2022 Pathfinder in February 2021 at the same time as the Frontier, and it showed a new design language plus a ton of high-tech features.
After thirty-five years on the market, the Pathfinder gathered all the information required to make a stand in its class and tried to be more convincing than anyone else. But every silver lining has its clouds, and that was the engine option. It was a good one, but only one.

From the outside, the Pathfinder was a mix between the rugged look of the Frontier and the soapy one from the Murano. Its front side featured a deep chromed rim for the black, massive grille. The headlights featured two LED daytime running lights and narrow headlamps. At the bottom of the front, wrapped-around bumper, the carmaker installed a metallic shield. From its sides, the designers induced the idea of a floating roof thanks to the black B- and D-pillars, while the C-pillar featured a black upper side.

Inside, the Pathfinder provided room for up to seven passengers. The second and third rows were folding so the vehicle could carry a 4x8 ft plywood. Even though Nissan emphasized that the car didn’t forget its utility values, it focused on comfort features. At the front, a new digital dashboard with a 12.3” touch-screen display for the infotainment system welcomed its passengers. The driver enjoyed the 10.8” display for the instrument cluster, and everyone else enjoyed the comfortable ride. 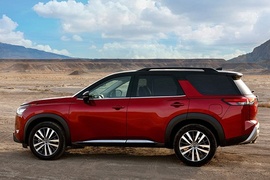