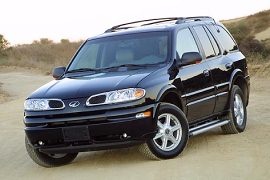 The 2001 Oldsmobile Bravada was actually the third and last generation of an SUV-line-up started in 1991.
The blandly styled Bravada was a spacious SUV equipped with a 270 HP inline-six Vortec power plant that had also been fitted on the Chevy TrailBlazer and GMC Envoy. Despite not having turned Oldsmobile’s inevitable demise into an award-winning show, the Bravada passed as a somewhat special vehicle thanks to its rear-wheel drive, which hadn’t been available on any Oldsmobile since 1992, and due to the privilege of having been the last new Oldsmobile to enter production.