The German carmaker Opel, now allied with the French group PSA (Peugeot-Citroen), has managed to launch its first electric model: the Corsa-e.
The model uses the same technical platform as its sibling, the Peugeot 208-e, with both models having been launched in 2019. The Corsa name has been on the market since 1982 and more than 13.6 million units have been sold since.

The power comes from a 100 kW electric motor with 260 Nm (191.8 lb-ft) of torque. Thanks to a 50 kWh battery pack installed in the floor, the total claimed range under WLTP norms is 330 km (205 miles). But Opel insisted that the car shouldn’t offer a boring drive so it made it fast enough to bring a smile on electric-cars lovers. The sprint from 0 to 50 kph (31 mph) is obtained in less than three seconds while the 0-100 kph (62 mph) acceleration takes 8.2 seconds.

On the outside, the Opel Corsa-e brings full-MatrixLED headlights, an industry first for the small-vehicle category. This means that 8 LEDs on each headlight are changing their light pattern according to information received from a frontal camera.

Inside, Opel offers as standard a 7” touchscreen display unit for the multimedia system. As an option, there is a 10” unit available, which includes the Opel Connect telematics system that can be accessed via an app on the smartphone. 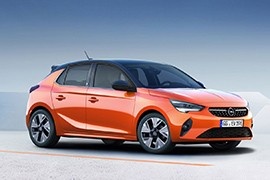