Two years after one of the most extreme Huayras, the BC, was unveiled, Pagani decided to finally show the Roadster version of the beastly supercar to the world.
As with every other Pagani, the limited edition Huayra Roadster BC epitomizes how the finest craftsmanship doesn’t necessarily exclude efficiency and performance, even if we’re talking about an open-top.

Thanks to the use of composite materials throughout the chassis, the Pagani Huayra Roadster BC only weighs a staggering 1,250 kg (2,756 pounds), making it the lightest open-top hypercar out there by far. Despite offering a ground clearance that is fitted for both public roads and racing circuits, the car’s body can generate no less than 500 kg at 280 kph (1,102 pounds at 174 mph), which is right up there with many dedicated racing cars. Thanks to the continuous collaboration with Mercedes-AMG, the Huayra Roadster BC benefits from a twin-turbocharged V12 that delivers no less than 800 horsepower and a staggering 1,050 Nm at just 2,000 rpm. The power is sent to the rear wheels through a transverse seven-speed sequential gearbox from Xtrac, made specially for Pagani. 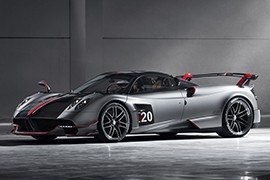