In the Porsche lineup, all the 2-door vehicles had race-track oriented versions.
The Cayman GTS was the more powerful version of the Cayman, but still able to do well on public roads.

It was well known by Porsche that its customers are taking their cars to the tracks to compete in friendly races. With that in mind, the GTS version was born as a lighter and more powerful car than the regular Cayman.

At the front, the Cayman GTS featured a specific apron, with a black grille and body-colored bumper. If the car was ordered black, the whole front would have been black. On the sides, the air-intakes for the mid-mounted engine were black as well. The door-mirrors were supported by two struts. In the back, the dual exhaust was installed, as usual for the range, in the middle of the apron. A retractable wing was mounted behind the engine lid.

Inside, the sport seats were covered in Alcantara in the middle and featured the 718 badges embroiled on the headrests. For the infotainment unit, the Cayman GTS featured a PCM (Porsche Communication Management) which could have been paired to a smartphone via Apple CarPlay. There was a way to communicate with an Android device as well, but it didn’t support Android Auto. For the GTS version, Porsche developed the Track Precision App, which was useful as automatically recorded, displayed, and analyzed the driving data on the smartphone.

The flat-four engine was a 2.5-liter with direct-injection and turbocharged. It offered more power than the S-version. It was paired as standard to a 6-speed manual, but there was the option for a 7-speed automatic PDK (dual-clutch). The ceramic brakes were on the options list, for those who were going on the tracks. 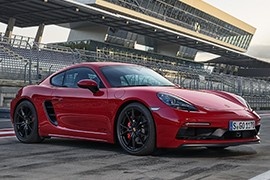