This is how the Cayenne should’ve looked since the beginning if the Porsche Board would have had guts! But now they fixed it and it looks great.
Not too bulky not too flat, just impressive and bold.

By chopping the roof by almost one inch (20mm) from a regular Cayenne Turbo, Porsche designers made the A-pillars shallower and the back seats have smaller headroom, but thanks to the lower rear seats position compared with the Cayenne Turbo by 30 mm, this will not be such a problem.

On the outside, a 5 dollar look fixed-lip spoiler on the tailgate differentiates the Turbo version from the rest of the range. Usually, there were some big aesthetic differences between the Turbo and the others, but now these are very subtle. Big wheels, big brakes and yellow brake-calipers can be ordered on both the Cayenne S and Turbo versions. The guys with regular Cayenne Coupes will have to paint them by themselves. 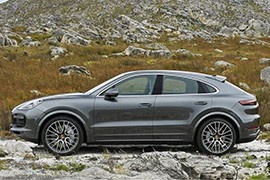