Unveiled a few months after its more powerful brothers, the Porsche Taycan 4S is the original entry level model in the world of electric Porsches.
Overall the car is almost identical to the Taycan Turbo and the Turbo S, but there are plenty of differences between the three models underneath for Porsche to choose to call and price them individually. Just like its more powerful brethren, the model is all-wheel-drive.

The Taycan 4S can be delivered with two battery sizes, with the bigger battery also coming with more horsepower for the model. The standard single-deck Li-ion battery has a total capacity of 79.2 kWh and give the car a range of up to 407 kilometers in accordance to WLTP. With 530 horsepower with an overboost function on tap, the standard Taycan 4S can accelerate form 0 to 100 kph (62 mph) in 4 seconds flat and has a top speed of 250 kph (155 mph). The two-deck 93.4 kWh Li-ion battery from the Taycan Turbo and Turbo S is optionally available, improving the maximum range of the car to 463 kilometers according to WLTP. Despite having up to 571 horsepower when fitted with the bigger battery, the upgraded Taycan 4S has identical acceleration and top speed numbers in both battery and power versions. 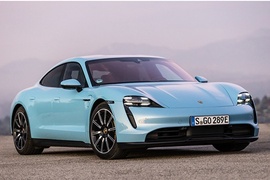