While the older Proton models were licensed Mitsubishi products, the 2016 Persona took a different path, and the Malaysian carmaker built a new generation on a new platform.
Proton worked hard to get a vehicle designed by their engineering team. The designers might not have been as inspired as the rest of the team, but they did a good job. Worth mentioned that Proton owned the British Lotus car company, and they worked together on the powertrain and suspension.

With a look that resembled some Kia models, but in a smaller package than the previous Persona generation, the 2016 model followed a new-edge design language. Its angular headlights, big grille from the lower side of the bumper, and side-scoops where the fog-lights were hosted enhanced the look of the car. The sculptured door panels, with ascending lines followed on the rear quarter panels, made the vehicle look more dynamic from the sides. But it is hard not to notice the tall, almost flat, side area. In the back, the black lower side of the bumper improved the not-so-handsome rear end.

Inside, the Persona was a surprise, offering decent legroom and headroom. It was bigger inside even its predecessor, which was a larger vehicle. The dashboard looked better in the two-tone color scheme, but the dials for the standard climate controls resembled those found in a Mitsubishi Colt. For the audio system, Proton fitted a CD-stereo as standard for most trim levels. An infotainment unit with sat-nav, 4G connectivity, Android Auto, and Apple CarPlay was on the options list.

Under the hood, Proton installed a 1.6-liter engine with variable valve timing. It was paired to a 5-speed manual or an optional CVT gearbox. 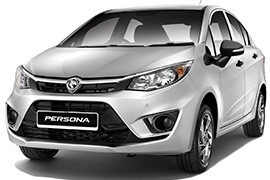