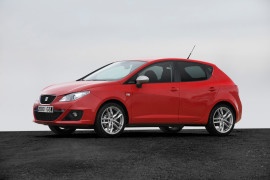 The sporty Ibiza FR was launched alongside the Cupra and Bocanegra in June 2009.
The FR represents the entry level in the high performance range for the Ibiza model and is available for both the 5-door hatchback and the SportCoupe (SC) bodystyles. Initially equipped with Volkswagen’s twin-charged 1.4 TSI petrol engine developing 150 hp, the same output as the 1.8 20VT on the previous version, since January 2010 a new 2.0 TDI engine developing 143 hp joined the FR lineup. With discreet exterior styling, the Ibiza FR is more easily recognizable at the interior, where FR badges and exclusive trim levels give away its sporty ambitions. 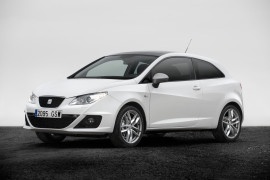 SEAT introduced a two-door version for its small-segment vehicle Ibiza in 2009, based on the Bocanegra concept car previewed at the 2008 Geneva Motor Show.
The Spanish carmaker introduced the fourth generation of the Ibiza during the world financial crisis when most carmakers had to shrink their operations. But Volkswagen Group had another idea: just launch new products and hope for the best. It was the same situation with the Ibiza, which was released in 2008 as a five-door hatchback and, in 2009, in a three-door version named Ibiza SC (Sport Coupe).

With a design signed by Luc Donckerwolke, the sporty sibling of the Ibiza range featured a more aggressive styling than its predecessor. Its elliptic headlights with sharp upper and lower corners were swept back towards the fenders. A profiled line emerged from the headlamps and descended towards the rear wheel arches, while the doors featured a sculptured line on the lower side. Behind the doors, the narrow side windows ensured some natural light for the rear seat passengers, while the raked-forward C-pillars completed the car’s sportier look.

Inside, the Ibiza SC featured bucket seats with some side bolstering for the base trim levels and high-bolstered ones for the sportier models. Despite its cheap-looking dashboard, SEAT still tried offering the supermini vehicle with some comfort features such as power windows and a CD player. In addition, the AC unit was available, starting with the second trim level. In the back, there was hardly room for an adult. Yet, two children could sit there.

Under the hood, the Ibiza SC received almost the same engine lineup as its five-door sibling. Although, the FR version with its 150 horses was exclusively available for the SC body version starting with 2009.