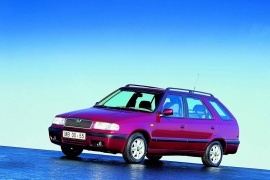 Skoda introduced the Felicia small-segment vehicle station wagon version in 1995, a reshaped and re-worked Skoda Forman.
In 1895, two men created a motorcycle and bicycle factory, which became the Skoda Auto. After WWII, the Czechoslovakian Communist Government took the factory. In 1991 though, Volkswagen Group bought the carmaker, which already had a small-segment vehicle designed by Bertone and engineered by the Czech engineers, the Favorit/Forman.

When the German carmaker took over the Czech brand, they found a good starting point. They rounded up the wedged-styled Forman, changed some interior parts, and increased the assembly quality. The Felicia Combi showed a squared-looking grille with the green badge at the top. Thus, the German engineers avoided Favorit’s overheating problem. The Felicia Combi featured a more extended roof from its sides than its hatchback sibling, ended above the rear wheels. A tilted-forward tailgate and an additional window between the back doors and the D-pillars completed the car’s look.

Inside, the Felicia Combi was still an econobox. By the time it was launched, the Felicia was the most affordable car in the U.K. But the carmaker built it well, and its round-shaped dashboard, with a visor extended over the center stack, looked good enough by any mass-market brand standards. Yes, it had cranked windows and no power steering. But it offered 447 liters (15.8 cu-ft) of trunk space with all the seats up. The folding rear bench seat increased that volume up to 1,366 liters (48.2 cu-ft) when folded.

When Skoda introduced the Felicia on the market, it offered only one engine option: a 1.3-liter, fuel-injected engine. Starting with 1995 and with the Combi version, the car received two additional powerplants: 1.6-liter gasoline and a 1.9-liter naturally aspirated diesel unit, produced by Volkswagen.