The so called “open SUV” SsangYong Musso was the Korea’s only pick-up choice on the market.
Rather small for a dual cab ute, the Musso’s dimensions were 5095mm long, 1960mm wide and 1825mm tall. A longer wheelbase version was available as well.

Practicality was one of the Musso’s strongest points, being the most spacious ute in the segment. Besides great room for the passengers in the back, the cabin’s layout was really good with intuitively placed controls and lots of storage spaces inside, including bottle holders in all doors.

Offering plenty of comfort in the front seats, finding the right driving position wasn’t hard at all, the Musso being equipped with a steering wheel that could be adjusted for both reach and rake.

Another strong point was the feeling inside the ute. Or maybe we should say inside the SUV, because the Musso didn’t feel like an ute, featured high quality materials inside the cabin, as well as many available features.

Though impressive in many aspects, the Musso was equipped with a 2.2-liter 4-cylinder engine rated at 178 hp and 400Nm. The power output could be considered modest for the class, however, the Musso was not as heavy as other utes, weighting a maximum of 2192 if equipped with the automatic transmission. 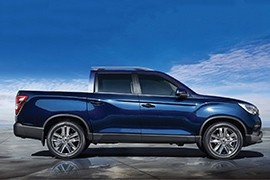