The best selling car nameplate in history, the Toyota Corolla has arrived at its 12th generation since it was launched.
With over 46 million Corollas sold worldwide since 1966, you can safely say it’s Toyota’s most successful model as well, which makes the new model a very important addition to Toyota’s modern stable.

Just like its hatchback brethren, which was unveiled earlier in 2018, the 2019 Toyota Corolla Sedan in U.S. guise is based on the Toyota New Global Architecture (TNGA), which puts the compact sedan’s focus on comfort and refinement while also bringing some much needed sportiness from the Corolla hatchback into the mix. The L, LE, and XLE trim levels will still use the 1.8-liter four-cylinder found in the previous generation, but Toyota has improved the engine’s overall output and fuel efficiency. The higher XSE and SE trim levels benefit from and all-new 2.0-liter four-cylinder with direct injection, somewhat humorously called the “Dynamic-Force,” with 169 horsepower and 151 lb-ft of torque. 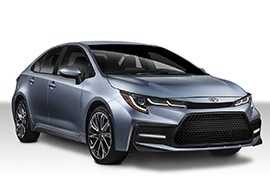