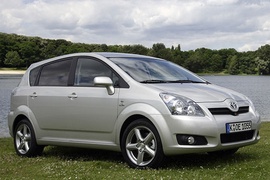 After three years on the market, Toyota Corolla Verso needed an update.
Its sales started to drop, and the market already started to shift towards the SUV and Crossover segment. Moreover, darker clouds appeared on the horizon bringing the world financial crisis.

The facelifted model tried to keep up with the market needs. Still, it couldn’t overtake the main obstacle as being an MPV, a segment where the French and the German carmakers ruled the market.

On the outside, the 2007 Corolla Verso sported a slightly enhanced front fascia. The grille lost a horizontal slat on the lower side, while the bumper sported a new design for the fog-lights side scoops. They looked slightly sportier, even though the car was not in the market for sporty drivers at all. It was more or less a soccer-mom vehicle. There was a new set of taillights at the back with fewer red lights under the same clear cover.

Inside, depending on the trim level, the Corolla Verso could feature the same four power windows and sound system. Yet, on 2007 model-year, it featured a more straightforward design. It still sported the same five-seat cabin that provided the Flat-7 seating system. That allowed customers to create a completely flat floor. Toyota delivered the Corolla Verso on the safety section with up to nine airbags, including one for the driver’s knees.

Under the hood, the carmaker upgraded the 2.2-diesel to either 150 hp or 177 hp with a Diesel Particulate Filter (DPF). In addition, a six-speed manual was available on the entire range, while a six-speed automatic was added to the list. 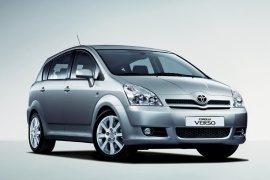 The ninth generation of the Corolla saw the daylight in 2004.
It was built as a sedan, a hatchback, station wagon, and minivan. Toyota used the Verso for the latter.

Corolla was already an important name on the compact market. Everybody knew it. It was like that pair of sneakers that everyone knows, and you can wear them either if you’re a billionaire or just a student. Except that not too many billionaires are driving a Corolla, or at all. Toyota built the Verso version as an MPV based on the same platform as its known compact-segment vehicle, and it used the well-known name to attract more buyers. The strategy worked.

On the outside, it looked like a Corolla with a higher roof and a raked hood. Its spacious greenhouse featured a high beltline to enhance passenger protection. The small window behind the rear doors resembled the one fitted on the regular, five-door hatchback version. A straight tailgate in the back was good to be used as an umbrella or a shelter. It was that big.

Inside, Toyota installed higher seats, and that led to more legroom for its occupants. For the driver, the carmaker installed the instrument cluster in the middle of the dashboard, slightly tilted toward the driver’s area. But the dials were easy to read even for those seated on the back-seat. Thus, they could have objections about the car’s speed.

Under the hood, Toyota installed almost the same engine lineup as those found in the regular Corolla. But the 1.33-liter unit was missing, and the smallest version featured a 1.6-liter unit. A 2.2-liter diesel unit was available. 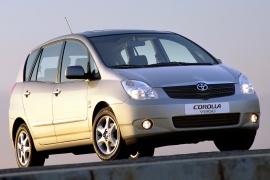 The Japanese carmaker started to develop an entire range of MPVs based on its regular production lineup and introduced the second-generation of the Corolla Verso in late 2001.
While the first generation of the Corolla Verso was far from a successful model, the second generation was a better bet when introduced in 2002. On the European market, the customers already had a wide choice of MPVs offered by French and German carmakers, but Toyota had to try and offer something different.

The Japanese offer was based on the successful Corolla lineup, and it didn’t try to hide that. Toyota installed similar headlights, grille, and bumper, but the hood was raised more toward a higher greenhouse. Its big, side windows offered a different perspective than vehicles such as the Renault Scenic. In the rear, the carmaker installed similar taillights as those from the regular Corolla hatchback.

Toyota placed its bets on the interior, where the Corolla Verso was highly appreciated. Even though it was available with only five seats, the rear bench was split-folding and could enlarge the trunk space from 417 liters (14.7 cu-ft) to 973 liters (34.4 cu-ft), which was impressive for a compact-sized vehicle.

For the engine bay, Toyota offered a choice of three engines ranged between 90 hp and 135 hp. Its diesel version was known for its great fuel-efficiency.