The 2006 Hilux SW4, also known as Toyota Fortuner, was first unveiled in 2005 and is the successor of the Toyota Hilux Sport Rider.
The 5-door SUV was initially addressed to the Asian, African and Latin American markets but some other countries got this new model, too. The Hilux SW4 is available in four engine versions, two gasoline and two diesel, ranging from 2.5 to 4.0 liter. Although the SW4 series initially included a four-wheel drive version powered by gasoline, the Japanese company discontinued the model and introduced a new two-wheel drive gasoline-powered edition in 2007. 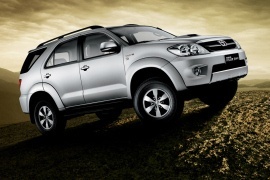