Introduced in 2016, the Toyota Prius Prime is the plug-in hybrid version of the standard Prius launched the same year.
For the first time, the Japanese automaker has visually differentiated the two models, both on the inside and out. For example, the front end is totally different, with thin LED headlights following the lines of the hood and grille as well as a redesigned bumper with massive carvings for the fog lights and LED daytime running lights. The rear gets new united taillights and a redesigned bumper, while the interior can be had with an optional 11.6-inch HD central infotainment system with standard navigation and available full color head-up display. Mechanically, the Prius Prime is built on the new TNGA (Toyota New Global Architecture) platform, comes with double-wishbone independent rear suspension and is powered by a refined hybrid powertrain. It can also go double the distance in pure EV mode, totaling for 22 miles, while being able to reach speeds of up to 84 mph without switching the gasoline engine ON. Total driving range on a full tank of gas and charged battery is estimated at around 600 miles. 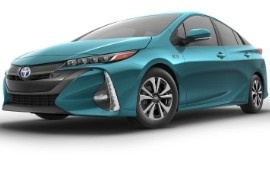