Like the rest of the range, the Shooting-brake featured a new pair of headlights and a new bumper design. Both versions of the facelifted version had the same length, but the extended roofline made the car look longer than the coupe. The chromed lines on the grille and the integrated LED daytime running lights from the headlights made the Arteon one of the best-looking Volkswagen on the market at its launch. The silver door-mirrors’ caps were on the options list, but the four rectangular exhausts in the back were fitted as standard.

Inside, the Arteon Shooting-brake made more headroom for the rear passengers due to the long roof. The 1 m (3.3 ft) legroom for the rear passengers was never a problem. The rear bench’s asymmetrical split-fold extended the trunk space from 565 liters (20 cu-ft) up to 1632 liters (57.6 cu-ft). There was a new infotainment unit for the front occupants, with wireless integration for the Apple CarPlay and Android Auto as well. 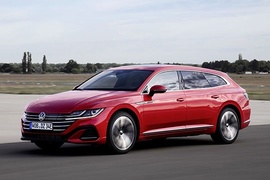