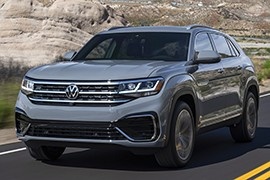 Copying a page from some of its more premium rivals’s books, like BMW and Mercedes-Benz, the Volkswagen Group has started a new “Coupe-SUV” offensive with most of its brands, including Volkswagen.
This is how the brand-new Atlas Cross Sport came to be, the first VW of its kind in this highly coveted segment. Obviously based on the U.S.-built Atlas, the new SUV-coupe features a more dramatic design than its brother, with the sloping roof and sportier stance being the biggest differences between the two models.

The Atlas Cross Sport is therefore part of VW’s strategy of doubling its biggest SUV segments with coupe-like Cross Sport versions. Available with 5 seats only, the new version is 2.8-inches shorter than the seven-seater Atlas and its roof is 2.3-inches lower. That said, both cars sit on the same 117.3-inch wheelbase, contributing for a rather generous interior space for a coupe-SUV. The Atlas Cross Sport offers no less than 111.8 cubic feet of passenger space, 40.3 cu ft of luggage space behind the second-row seats and no less than 77.8 cu ft after folding the rear seats. Compared to the regular Atlas, the Cross Sport also gets a new three-bar engine grille, a new light signature that extends the width of the middle bar like on VW sportier models, a more aggressive front bumper and different engine hood. The car is available with two powertrains, both being optionally paired with either FWD or all-wheel-drive: a V6 with 276 horsepower and an entry-level turbocharged four-cylinder with 235 horsepower.