For three decades, the Jetta was the best-selling Volkswagen on the market, thanks to its compact size and three-box sedan look, which made it suitable for families and company cars as well.
In 2021, the German carmaker introduced a facelifted version for Jetta’s seventh generation, which modified the styling and some of the engines.

On the outside, the car featured a new grille with two distinctive chromed bars that flanked the VW logo in the middle. For the GLI version, a red strip ran across the bumper, connecting the standard LED headlights. From its sides, the chromed trims around the windows were another standard feature for the 2022 model year.

Inside, the German carmaker upgraded the infotainment system to the MIB3 version, fitted as standard for the GLI and available as an option for the rest of the range. Volkswagen also included an 8” display for the instrument cluster, with an option for a 10” unit dubbed Digital Cockpit Pro. As expected, the car featured wireless Android Auto and Apple CarPlay connectivity.

Under the hood, Volkswagen adopted the 1.5-liter turbocharged unit for most of the range. On the other hand, the GLI, provided the same 2.0-liter turbocharged powerplant as its predecessor. Depending on the options and version, an automatic (dual-clutch) transmission will be available for the entire range. 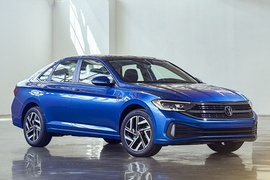