With over 30 million Passat models manufactured over the span of 7 generations, the mid-cycle facelift of the eighth iteration of the nameplate in station wagon Alltrack guise was unveiled in 2019, alongside the other members of the Passat family.
Just like its platform brothers, the revamped Passat Alltrack has received a cornucopia of technology, most of it having trickled down from some of the more expensive car brands under the Volkswagen Group umbrella.

In other words the eighth generation of the Volkswagen Passat has received one of the most technologically advanced mid-cycle facelifts in its history. Thanks to new hardware and software, the new Digital Cockpit has been massively improved compared to the previous Active Info Display. With much enhanced graphics and improved features, the system now offers three various display configurations can be customized using the redesigned multifunction steering wheel. Still with the Passat Variant used as the base model, the Alltrack is now a lot more up to date compared to its rivals. 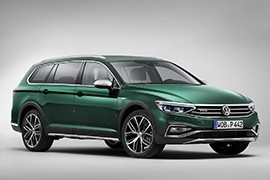