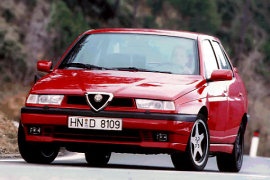 After the Fiat took the Alfa Romeo brand from the Italian government, it started rebuilding its glory.
And, in 1992, the 155 was on the market and, soon after, on top of the podiums in motorsports.

The Outdated Alfa Romeo 75 with its rear-wheel-drive system had to go. After a successful career, a modern vehicle, with front-wheel-drive had to come. The answer was the Alfa Romeo 155. It shared the platform with the Lancia Delta and Fiat Tempra. It featured an all-wheel-drive system for the top, Q4 version. And it was a practical four-door sedan.

The angular look of the vehicle was trendy when the 155 made its entrance at the Geneva Motor Show. The narrow front end with the Alfa Romeo shield in the middle extended over the hood looked fresh and modern. The ascending beltline allowed a big trunk space of 525 liters (18.5 cu-ft). The sporty look was enhanced later on with the introduction of a wider body.

Inside the cabin, there was a long list of amenities. The Fiat really struggled to get all the options boxes checked for the 155. The car featured climate control, power windows, and bolstered seats. After all, it was a sports brand.

The 155 was received with some eyebrows risen. The former 75 was built before the Fiat took over the Alfa Romeo brand so the new, front-wheel-drive platform had to prove itself worthy. The car was entered into the DTM (German Touring-car Championship) and it won in front of the German car manufacturers.