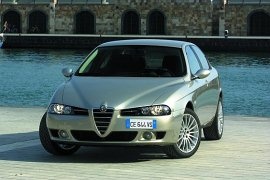 Even if it was hard to re-design a beautiful car, Alfa Romeo had to refresh the 156 lineup, and it did it in two steps.
Usually, when a carmaker refreshes a vehicle, it works on several areas, and then it left them changed until the production ends or a new facelift occurs. The Italian carmaker chose a different path. It upgraded the interior in 2002, with minimal tweaks on the outside, and then it changed the exterior. That’s why the 2003 model might be considered the real facelifted version of the 156 range.

The front part of a car was the one that defined it the most, and the Italian designers knew that. That’s why they completely changed the headlights, making them narrower and broader under the slightly extended hood. Giorgetto Giugiaro was the one responsible for that change, and it did a great job, as always. The big Alfa Romeo shield was taller, intruding into the bumper to the lower area. In the back, Giugiaro re-designed the taillights and changed their shapes.

Inside, the car carried over the 2002 upgraded interior with the same aluminum center stack adorned by three gauges on its top side. The binocular-styled instrument cluster featured two white dials for the speedometer and tachometer, with the red needles pointing at 6-o-clock when in resting position. The front seats featured high-bolstering areas that hugged their occupants, while the rear-seat room was just adequate, but not large, for two passengers.

Under the hood, Alfa Romeo brought a range of four gasoline and three turbo-diesel engines paired as standard to five or six-speed manual transmission, depending on the version. An automated (named Selespeed) gearbox was on the options list. For the suspension, Alfa Romeo kept the same double-wishbone system at the front, with McPherson struts in the rear. 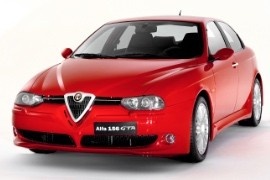 In 2001, Alfa Romeo introduced a special version for its mid-size range: the GTA, which took its name from the 1965 GTA model.
Alfa Romeo launched the 156 range at the 1997 Frankfurt Motor Show. Four years later, it launched the most powerful version, named GTA (Gran Turismo Alleggerita). It wasn’t just more powerful, but it showed its muscles on special outside details. Alfa Romeo sold the first 159 GTA at a bid at the Frankfurt Motor Show for charity, just two weeks after 9/11, 2001.

The designers replaced all the bumpers and rocker-panels from the standard Alfa Romeo 159 package. They replaced it with an air-splitter at the front, inspired by a Formula 1 car’s nose-wing. On the sides, the rocker-panels took their aerodynamic role seriously and streamlined the air along with the bodywork and over the rear fenders. Alfa Romeo could just stop there, but it didn’t. It changed the rear bumper as well, with a few aerodynamic details on the lower apron. Then, to complete the sporty image, it placed twin chromed tips on the exhaust.

With its leather-clad interior, sports-bucket seats with integrated headrests, and aluminum trims and pedals, the Alfa Romeo 156 GTA stood apart from the rest of its siblings. The whole atmosphere was sporty, and the high-bolstered seats promised good side support during hard cornering. In the back, the Italian carmaker profiled the bench for two adults and provided enough legroom and headroom for them.

But the real change was under the hood, where Alfa Romeo installed a 3.2-liter V-6 engine. It was tuned to provide 250 hp and mated to a standard six-speed manual gearbox. As an option, the Italian brand offered an option for its Selespeed (automated) gearbox with paddle-shifters. 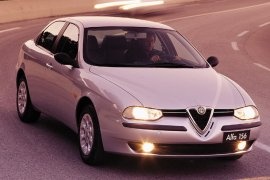 It was hard to replace the successful Alfa Romeo 155, but it had to.
In 1997, the new Alfa Romeo 156 was completely different than what the 155 was before.

The Alfa Romeo 156 was a four-door sedan that brought the Italian brand into a new era, with a car that was not only sporty, but it was also practical, fuel-efficient, comfortable, and stylish. To achieve that, the Alfa Romeo Centro Stile started from a blank sheet of paper and threw away the boxy design inherited from the 155.

The car design received many awards, and the car itself won the European 1998 “Car of the Year” award. The curved surfaces, the front fascia with the three-piece grille that forced the license plate to be installed on one side, and the coupe-like silhouette with hidden door handle for the rear doors promised a success story. The short rear overhang with a tall and straight trunk amplified the dynamic look of the car.

Inside, there were even more reasons to fall in love with the vehicle. A sporty center console tilted toward the driver, an instrument cluster with binocular-style dials were installed. The speedometer’s needle had the zero kph position at six o’clock. Comfortable seats and nice velour materials were used for the base trim model, while the front bucket-seats were standard for the whole range. The rear seats were not very spacious, with limited room for knees and head.

For the drivetrain, the all-wheel independent suspension gave the car more comfort and better handling abilities. It was a sporty executive compact vehicle, that won the hearts of the Alfa Romeo fans.