The first SUV released by Alfa Romeo, built on the Giulia platform, the European version of the Stelvio was unveiled to the public in 2017 at the Geneva Motor Show.
The Stelvio was powered by either a 2.2-liter diesel engine producing 207 hp or a 2.0-liter gasoline engine developing 276 hp. Both engines were mated to an 8-speed ZF automatic transmission which sent to power to all 4 wheels.

The sportier Quadrofoglio was released at the Los Angeles Motor Show in 2016 and was equipped with a more powerful engine developing 503 hp and reaching 100 km/h in 3.9 seconds. It was considered to be the world’s fastest SUV. The mid-size SUV weighed only 1660 kg, thus the reason why the Stelvio’s performance claims were very strong.

The Alfa Romeo Stelvio was tested by the Euro NCAP in 2017 and scored an exceptional 97% adult protection, which was close to the Volvo XC90’s score.
The car was available with 4 trim levels: Stelvio, Super, Speciale and Milano Edizione. 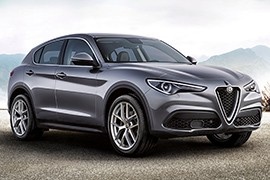