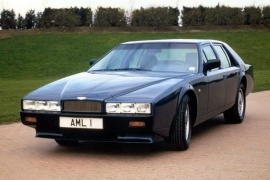 Introduced in 1974, the Aston Martin Lagonda was a 4-door luxurious sedan designed for the wealthiest.
During its 13 years of life, the Lagonda received a single facelift for its third generation if 1986.

The Lagonda had a pretty weird design from day 1, being wide, flat and pointy in the front. People considered it ugly at the time.
However, Aston introduced the facelift with the aim of changing the razor-like exterior design, giving it a more roundish look.

Inside, the Lagonda featured the same luxurious and perfectly crafted interior. It was the first production car to feature a digital instrument panel which displayed the gear, the speed, the engine temperature and others. The screen was also reactive, showing different warnings such as an open trunk lid or the high beam sign.

Rather unusual, a giant flat switch panel was installed at the left of the steering wheel, full of different toggle switches.

While today most features might look dated, the Lagonda was then equipped with cutting edge technology.

No changes were made under the hood, the Lagonda still featuring the 5.3-liter V8 engine that developed 300 hp and 406 Nm.
Something people wouldn’t have expected in the 80s, the Lagonda was equipped with an electric fuel door on both sides, thus fueling the sedan was easier.

The luxurious saloon featured the Lagonda badge instead of the Aston Martin’s. 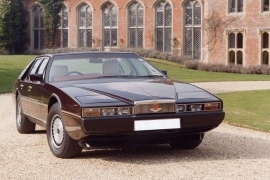 Facing financial troubles in the beginning of the ’70s, Aston Martin introduced the Lagonda four-door model in 1974, but it wasn’t until 1976 when the model had a significant success on the market.
In 1976, the wedge-shaped Lagonda shook the world with its unusual design. It had some inspiration from the Lamborghini Countach, and some from the Lancia Stratos. Aston Martin tried to revive the Lagonda brand and that is why the car didn’t have any Aston Martin badges on it. On the hood, the steering-wheel, the fuel-caps and on the trunk there was only the Lagonda badge.

A long, flat hood on a narrow front end and a pair of pop-up headlights were a unique signature of the car. Another two lights were installed in the front bumper and the turn-signals. The car was also very wide, just to make it more faster on the corners. On the roof, there was an unusual placed sunroof. It was unusual because it was placed above the rear seats, unlike the usual systems that had it above the front seats.

Inside, there were four seats covered in leather. The entire interior was futuristic starting with the controls for the front power seats and continuing with a complete LED dashboard. The rear seats were cramped and the access to them was difficult. But still, the rear passengers had their own climate control unit.

Under the hood there was a 5.3-liter V8 engine with a four-cam carburetor. The standard transmission was a 5-speed manual and a 3-speed automatic was offered as an option.