Not exactly an SUV or a crossover, but as sub-compact with some crossover attributes and stance, the Audi A1 citycarver is the first of its kind, with no direct or indirect predecessor.
The model is obviously based on the regular A1 Sportback, but has an increased ground clearance, bigger wheels and a more robust exterior look.

Design wise, the Audi A1 citycarver is more reminiscent of an Audi Q model, especially thanks to the look of the large, octagonal Singleframe engine grill. That said, despite the additional four centimeters of ground clearance thanks to the different suspension and bigger wheels, underbody protection and other SUV-like features, the car is front-wheel-drive only. The quattro badge will never be available on this generation of the A1, so the A1 citycarver won’t get it either. That said, almost everything except the design is identical between the Sportback and the citycarver, meaning that Audi simply wanted to offer more choice in the sub-compact segment. 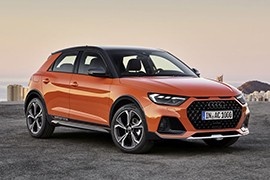