Unlike most of its predecessors, the fifth generation of the Audi A4 received a pretty large mid-cycle facelift, including a revamped exterior and interior design, not to mention technical upgrades as well.
The exterior design became more integrated with the latest evolution of Audi’s design language by making a small but comprehensive leap.

On the outside, the Singleframe grille is flatter and also a wider look, with more horizontal lines that emphasize the car’s width being present on both ends of the car. Revamped contour lines above the wheels make for a fresher side view as well. The new headlights use LED technology as standard, although the Matrix LED headlamps are still optional. On the powerplant side, the facelifted fifth-generation A4 feature three choices that include a mild-hybrid system based on 12 volts. In total, six engine options are available with either front-wheel-drive or quattro all-wheel-drive, of which some are paired with a manual transmission, a seven-speed S Tronic or an eight-speed tiptronic. 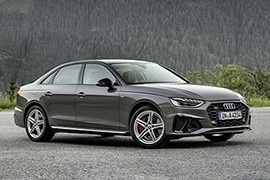