Audi refreshed the fourth generation of the A8 in 2021, and there were more than just a few exterior and interior details in it.
In 1994, Audi decided to attack its main competitors BMW and Mercedes-Benz, in the upper premium segment and introduced the A8.

The constant evolution of the German limousine gave it a seat at the table of executive limousines. That trend continued to the fourth generation, which Audi introduced in 2017. Despite the world pandemic that shattered the world in 2020, the carmaker kept its promise and refreshed its flagship four years after the initial launch.

One of the most striking features of the 2022 A8 was the front fascia. The big, hexagonal, singleframe grille featured black and piano-black fins and a chromed rim. In addition, a pair of standard Matrix-LED headlights with an option for digital-LED ensured an optimum driving light. From the sides, the 2022 A8 showed new side sills, carried over from the S8, which emphasized the car’s dynamic character. Another premiere for the 2022 model year was the introduction of the S-Line package, which became available. It replaced the shiny chromed grille with a darker one and added a few other exterior details.

Inside, the A8 was as comfortable as a German limousine could be. Seats with up to 18 cushions provided various massage functions. A set of 10.1 HD TVs could provide entertainment for the rear seat passengers while the discreet Matrix-LED ensured a discreet or brighter illumination. At the front, the carmaker removed any gauges with displays. The Audi Virtual Cockpit replaced the analog dials in the dashboard, while on the center stack, the infotainment display and an additional control panel with a haptic touchscreen provided further controls for the MMI, climate controls, or driving options. 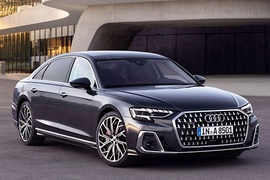