Based on the MQB platform developed by the Volkswagen group for most of its cars, the Q2 was a subcompact crossover.
It was not available in the U.S. or Canada.

Audi made a good name for itself when it started to build the Q7. The luxurious, big, SUV, was a hit and it encouraged its management to offer SUVs in more sizes. The Q5 and Q3 were well received by the market as well. Their smaller brother, Q2, was launched in 2016 and refreshed in 2020.

The angular lines of the Q2 were amplified by the new LED headlights fitted as standard. There was an option for Matrix LED. The big, black, grille in the front combined with the black scoops in the apron made a powerful statement of the car. In the back, the D-pillars were black as well, creating the sensation of a floating roofline. The taillights were modified as well and fitted with LED.

Inside, there was a new design language for the gear-stick, the air-vents, or the gear-selector for the S-Tronic transmission. The upholstery was completely changed with microfiber “Dinamica” instead of Alcantara. Audi offered eight packages for the interior, from a basic to a luxurious or sporty one. The trunk was kept at the same value with up to 1050 liters (37.1 cu-ft) of space with the rear seats folded or 405 liters (14.3 cu-ft) with seats in normal position.

The Q2 was offered with a choice of diesel and gasoline engines, all turbocharged. In order to minimize the diesel emissions, the TDI models featured two SCR catalytic converter systems. The Q2 was available with front or all-wheel-drive systems, with a choice of 6-speed manual or 7-Speed S-Tronic (dual-clutch) automatic gearbox. 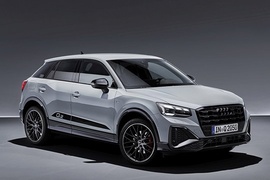